NAMLO Foods Momos: A Taste of the Himalayas

NAMLO Foods founders’: Prayas, Suman, Roshan, and Raj were born and raised in Nepal, and have indulged in Nepali Cuisine their whole life. When they relocated to the United States they opened restaurants, including Tikka Masala, in Bethesda.

Namlos can be found on baskets called dokos which are used to transport large amounts of produce or grains. Namlo Foods’ momos can be described as a version of a dumpling. The word momo comes from the Tibetan word “mog mog”, which is believed to mean a variation of bread. The difference between momos and dumplings is that momos are mainly supposed to be steamed and always come stuffed. Unlike some dumplings, a momo is meant to hold a filling preference, whether this is vegetables or meat, there are many variations of momos.

NAMLO Foods is introducing momos to the retail market. They are launching with 2 different flavors, vegan and vegetarian. The momos have an array of spices in their fillings, including nutmeg, cardamom, cloves, cinnamon, and bay leaves. The vegan momos are filled with vegetables including cauliflower and cabbage. The vegetarian momos have all the great spices and vegetables featured in the vegan ones, but also includes paneer cheese, an Indian subcontinent cheese, which adds a nice creamy consistency to the momo. Momos are great steamed, air-fried, and pan-fried as well.  Momos can be differentiated as a healthier comfort food.

The launch process, like for most CPG brands, was not exactly a perfect transition. The brand initially thought that they wanted to include a sauce in the bags with the Momos, but realized that wouldn’t be a possibility with the type of packaging they have and the amount of momos they wanted to include in each bag. In the product formulation, the NAMLO Foods team really wanted to ensure that they were keeping their momos as close to Nepali traditions as possible. The brand hoped to launch a sauce, like the traditional momo sauce, made with chutney and tomatoes.

Head to your neighborhood Union Kitchen and grab a bag of NAMLO Foods momos in the following flavors: vegetarian and vegan. For more updates on NAMLO Foods, check Union Kitchen’s social media! 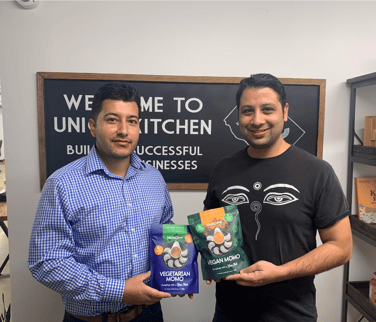