Since Berg Bites’ initial launch, the company has reached exciting milestones. This includes selling to the New Orleans Pelicans and New York Giants,  rebranding with new flavors and packaging, and being stocked in 400 retailers all across the country, and rebranding with. Now, Berg Bites has another achievement to add to their growing list: being the number one rated QVC food product!

The product has humble beginnings. Daniel Berg founded his company in college, inspired by his family’s recipe of protein bites. He wanted to create a tasty dessert that was also healthy to eat– and, encouraged by his friends and family, he put his original product on the market. 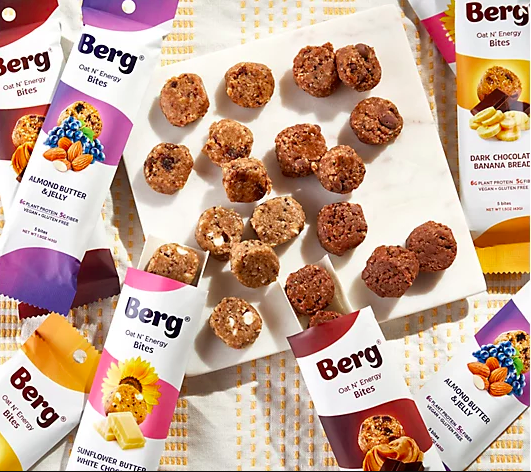 Since Berg Bites’ initial launch, the product was set on an accelerated trajectory. Berg Bites placed 2nd in George Washington University’s New Venture Competition, one of the largest collegiate new venture competitions in the country. As the company expanded, Berg kept his manufacturing in-house and was able to innovate his product on his own terms. Now, around 5 years later, Berg Bites is well on its way to becoming a household name.

In an initial interview with Union Kitchen, Berg mentioned that he didn’t see his brand as successful yet. He says he’ll consider himself “making it” when Berg Bites becomes a nationally scaled brand in 3 - 5 years. It’s safe to say that Berg has officially fulfilled his dreams.

According to a recent QVC video feature, Berg Bites was previously sold on their website– it “flew out the door” and was customer top-rated. Currently, you have to be on the waitlist to purchase a variety pack of almond butter and jelly and dark chocolate banana bread Berg Bites on the QVC website. Until then, you can try out the highly successful (and delicious!) product on their website and in retailers all over the U.S.