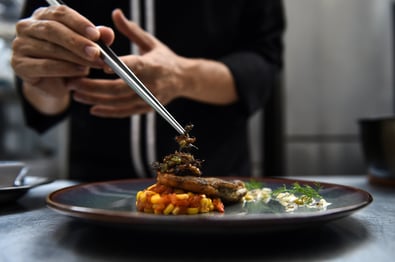 Have you ever sent a meal back at a restaurant because you found a bug in it? Or eaten a peach and saw that you were sharing it with a tiny little creature? It happens, and it is an easy way to lose an appetite. However, you’re in luck because bugs are actually a great source of protein and nutrients! In this article,we cover the benefits of eating bugs, ways you can incorporate them into your diet, and some CPG brands who have jumped on the insect train.

In technical terms, bugs are pancrustacea creatures that move by walking, flying, and sometimes swimming. Most of them have eyes and legs. The practice of eating bugs has been around for centuries and is still common in cultures across Asia, Africa, and Latin America. In China, beekeepers consume larvae from their beehives. Although bugs are seen as off putting and inedible in the United States and Europe, we actually eat bugs more often than we realize. The FDA allows a small amount of bug fragments in certain foods. For example, in allspice, the FDA allows an average of 30 or more insect fragments per 10 grams. Even though this may gross you out, it’s completely sanitary and may open your mind to trying bugs in the future.

Although the act of eating bugs alone is enough to at least grab someone’s attention, there are valid reasons why people eat them. Bugs are a sustainable source of nutrients, such as protein. Meat, such as beef and steak, a mainstream form of protein in the United States, is becoming a less and less sustainable source of meat. This is in part related to factory farming, which is highly energy intensive and often viewed as inhumane. Aside from factory farming being inhumane due to animal cruelty and confinement, it also causes pollution. This pollution contaminates water and the air and contributes to methane emissions in the atmosphere.

With the ongoing shift towards sustainability in the packaged food industry, some brands and individuals are turning to bugs.  Bugs provide the nutrients and protein people seek in traditional meats without the same carbon footprint. Further, when combined with the right seasonings, they even provide a similar taste and texture of meat, particularly beef. For this reason, insects, such as mealworms, are a sustainable alternative to beef.

While it seems challenging at first, there are ways to incorporate bugs into your diet and even your products. Since 2019, the edible insects market size exceeded $112 million and is expected to grow rapidly in the coming years. The first step in incorporating any new food into your diet is to educate yourself on its history. As mentioned before, the act of eating bugs carries historical, cultural, and nutritional relevance. Including the nutritional value of bugs on your packaging may also help open the minds of consumers, especially since consumers today are more concerned than ever on the nutritional value and benefits of the food they’re purchasing. Further, as with any new product, your packaging can be used as an educational tool to ensure consumers how safe and beneficial bugs are. Another way to incorporate insects into products is to add bugs into foods that people in the United States are already familiar with. Chocolate chip cricket cookies are a good example of how to include bugs with an already loved food.

Currently, there are brands in the market that sell bug products and have received positive feedback. People love snacking, and Ento Market brand has figured out the key to open their audience’s minds to bugs while promising them the same great snacking experience. One of their highly praised products, BBQ Mealworms, provides consumers with a flavor and texture combination similar to meat. Consumers mention in the reviews that they admire the meaty texture and savory flavor.

By this point, hopefully you are less off put by bugs and maybe are curious to try some. Bugs becoming a mainstream form of cuisine in all parts of the world is a way to provide people with the nutrients they need without making a dent in their carbon footprint. Education is the key to moving forward with this idea, and the more brands that provide their audience with this education, the more common this practice will become. As mentioned, there are already cultures that include bugs in their daily cuisine. We can take this as an opportunity to learn from other cultures, get the protein and nutrients we seek in meat, and expand our taste buds.