Serving Life's Simple Pleasures, One Scoop at a Time 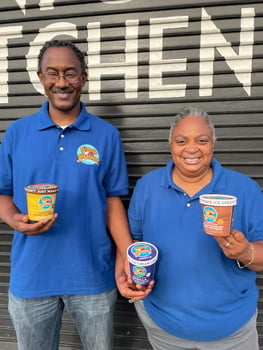 Ice cream is one of life’s simple pleasures. It keeps you cool during the summer, provides a canvas for flavors to pop, and is a delicious treat after dinner. But, what makes ice cream truly special are the people creating it.

The couple met while they were serving in the military in Florida. Both of them dreamed of one day opening their own food business, but they were not sure what product they would create. However, one thing was certain: they had an affinity for desserts.

Both Terri and Rodney loved eating and enjoying the experience food provided- the flavors, the textures, and the community food facilitates. While in Florida, they began searching for a dessert product that was missing in their neighborhood. Through this exploratory research, they discovered there was not a single ice cream shop in the area. Terri and Rodney realized that they could fill this market gap and create something truly special. It also helped that Florida was the perfect temperament for ice cream, as the lack of cold weather would encourage customers to eat this cold treat year round. This is when Simple Pleasures Ice began.

They started their business by selling pre-packaged frozen novelties from mobile push carts in their Florida town. As their ice cream business was gaining momentum, the U.S. Air Force selected Rodney for an assignment to Europe. Although it derailed their plans, they used the opportunity to taste a variety of different ice creams and to get inspiration for new flavor combinations and ideas.

A few years later, Rodney got stationed at Bolling AFB, which brought the couple and their daughters to D.C. After researching and crunching the numbers, Simple Pleasures Ice became a viable retail entity. Two years later, Rodney retired from the U.S. Air Force and fully focused on making ice cream.

Since Rodney’s decision, Simple Pleasures ice cream shop served delicious ice cream to the DMV community for about 20 years. Now, they are looking to expand their operation by serving pre-packaged ice cream to reach the larger DMV area and beyond!

Terri and Rodney’s story is a testament to never giving up. Their military service provided numerous opportunities to travel around the world, allowing them to try dozens of new flavors, receive inspiration, and become experts in their field.